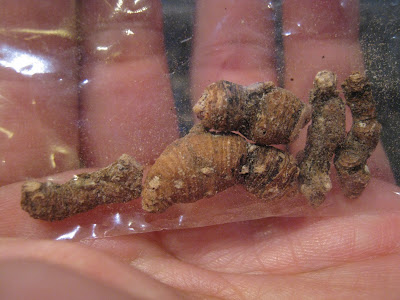 According to the ayurvedic doctor, Ati-Udayan is used in treatment for many types of illnesses, including but not limited to fever, cough, malaria, liver problems, etc. The raw dried rhizomes shown above is considered as a poison and should not be directly consumed without additional preparation. They should first be boiled in milk for a period of time, before they are being dried again and pounded into powder form. The powder can then be consumed by dissolving half a tea spoon of it in hot water. These Ati-Udayan rhizomes are now commonly being imported from India.

In case you have not guessed yet, Ati-Udayan is the Sri Lanka Sinhala name for Cryptocorynes.
Posted by illumbomb at 11:26 AM