After experimenting with growing cryptocorynes in plastic containers with the water above substrate level, I decided to use the same method to re-pot some of my cryptocorynes.

See below for the re-potting process. First I filled the base of the container with some coconut husk (I thought that this will ensure that the substrate will not be overly compacted at the base and will allow space for the roots to grow better).

Next since most of the cryptocorynes I re-potted are from peat rich area, I added some peat moss to the base.

Next I topped up the substrate with some ADA soil to weight down the lighter coconut husk and peat moss and added some granular fertiliser.

As usual, distilled water is used.

The final layer above is filled with fine sand which I bought from the nursery.

The cryptocorynes are then planted and distilled water is added to flood the substrate (i.e. water level slightly above top of substrate).

The containers are left open and placed in an enclosed tank.

Hopefully the cryptocorynes will like the new cultivation environment...
Posted by illumbomb at 6:53 PM 5 comments:

My explorer friend has found a new species of cryptocoryne at Central Borneo which he has named as Cryptocoryne nakamotoi. Any comments? 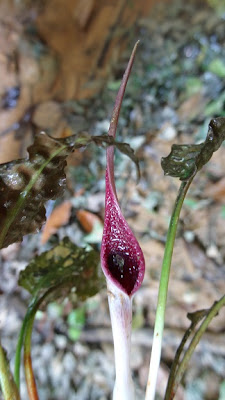 Photograph is linked from my explorer friend's website.
Posted by illumbomb at 8:14 AM 4 comments:

Fascinating isn't it?
Posted by illumbomb at 4:58 PM 1 comment: