When I first received specimens of C. sp. 'Lingga Island' from my friend in Nov 08 last year, there was one specimen which has 2 fruits on it (see below, one is near to my index finger and one is near to my thumb). One melted away after a few weeks while the other slowly grew and finally opened up this week. 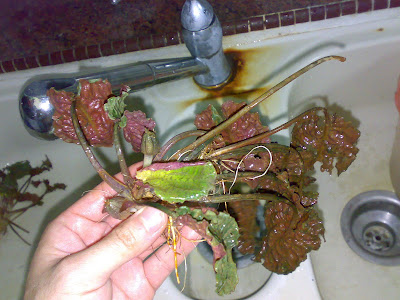 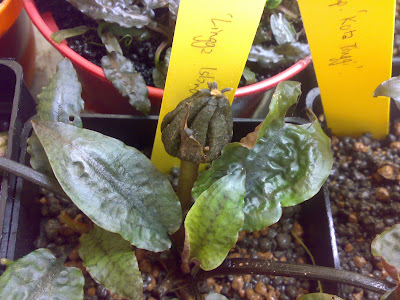 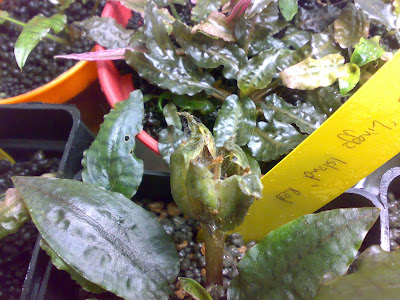 Unlike in the nature where the fruit will open into a beautiful multi-pointed star shape, the fruit in my humid and warm tank merely opened up at the tip to reveal the seeds inside. As the entire fruit looked as if it was starting to rot, I decided to cut the fruit and throw the fruit together with the seeds into a tupperware of water to attempt to harvest the seeds. 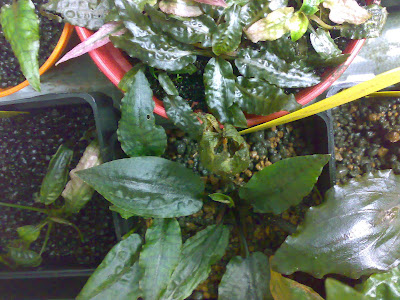 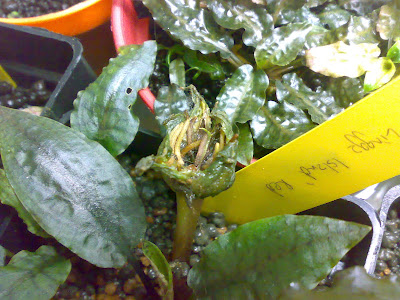 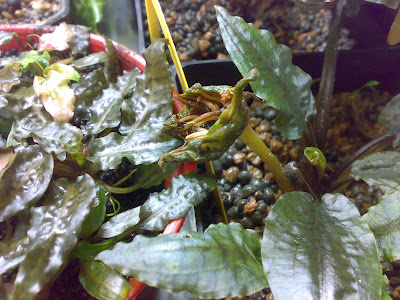 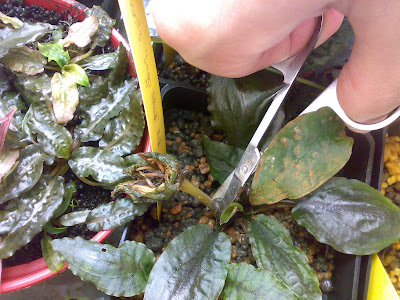 The fruit started to melt and disintegrate away after I started to twirl and stir it in the water revealing the seeds. I slowly removed the seeds from the remnants of the fruit and found out that some of the seeds were rather hard and healthy while others had turned soft and seemed as if they were starting to rot. A total of about 40 healthier seeds were harvested as compared to about 30 rotting seeds and 2 of the 40 seeds have started germinating. 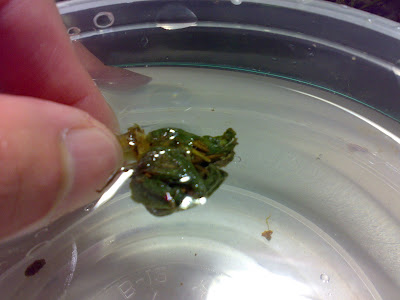 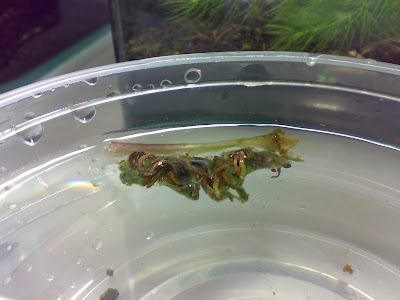 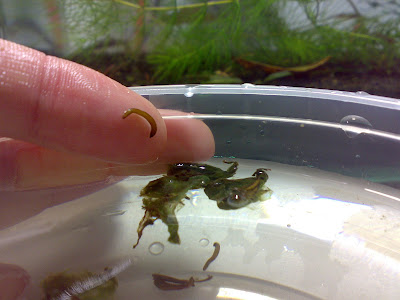 The seeds below are those which had started to melt. 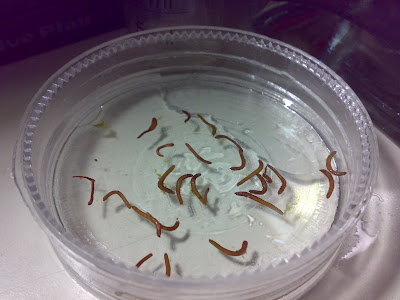 The seeds below are the harder ones with 2 which have already started to geminate. 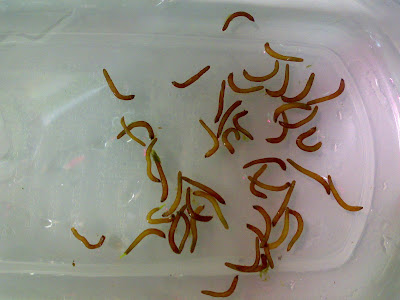 The remnants of the fruit which had quickly disintegrated away in water. 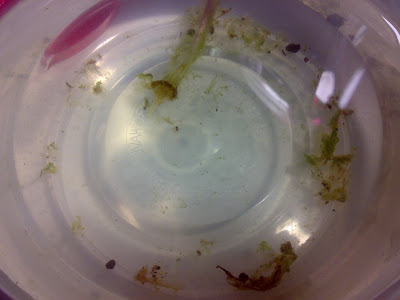 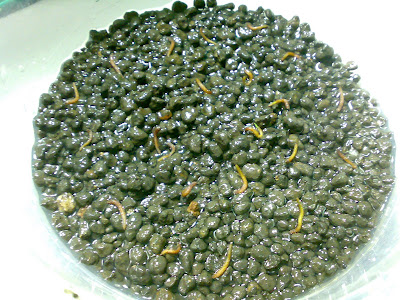 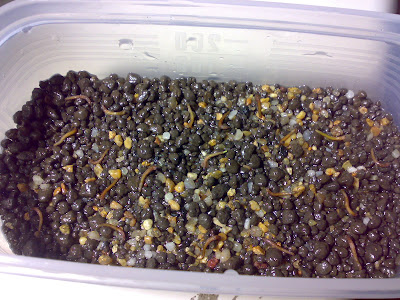 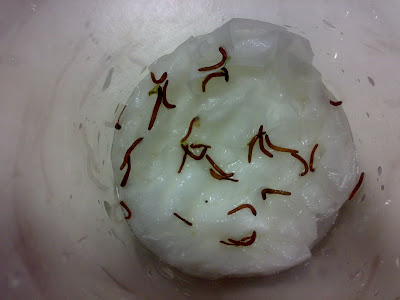 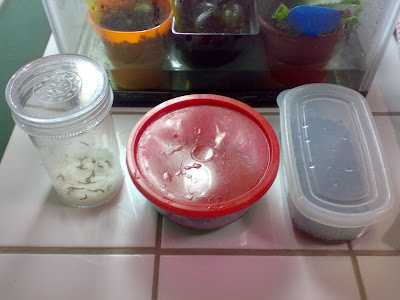 I will keep you guys updated of the outcome. As this is the first time I am harvesting the seeds of cryptocoryne and trying to germinate them, any suggestions are most welcomed! Thanks!
Posted by illumbomb at 10:52 PM

You are very lucky to collect seeds.
I once collected seeds of
longicauda and striolata.
All of them have already germinated
and grew slowly.
It is very interesting to me to
take care of seedings.
good lucky~

Thanks! So how long did it take for your seeds to germinate and grow into sizable plantlets for repotting? Did you leave the seedlings to grow on the surface of the substrate like me or did you slowly top up and eventually cover them under a thin layer of substrate to allow them to root themselves easier?

Hi,as you said,i just put seeds on the surface of substrate .
they germinated after 3~7 days and
then rooted automatically into the
medium .
Therefore i think that you don't
worry about it.
Although i seeded down 9 months ago,time is too short to repotted
it.
Cryptocoryne grew really slowly at seedling stage.

Thanks for sharing your photographs. They are still so tiny after 2 months and even after 9 months, definately much smaller than those grown from runners. Seemed like a lot of patience is required to grow cryptocorynes from seeds.

Your website is very informative. I am trying to grow cryptocoryne. Two weeks after getting a crypt from a shop, the leaves are melting away. with yellow discolouration. I have used laterite mixed with gravel and river sand and in the bottom I have used some clay. It is a natural sunlight tank, made of cement. There is also some algal growth, but I do not know what species of algae. I do not access to all the aquarium soil substrates, etc. I have read that charcoal can be used to keep the plants? Is it correct. Kindly suggest how to replant this plant.(I have only one and want to see it grow) . I can send you pictures if you suggest me to. Thank you.

From your descriptions, it sounded like you are growing the cryptocoryne submersed. Do you know which species of cryptocoryne did you bought?

Sorry but I do not have much experience in submersed cultivation. I only know that cryptocoryne melt when cultivation condition changes so perhaps yours was responding to the new environment? If new leaf grows out after a few days, just leave it and not shift it around or it may melt further.

I have not used charcoal as a substrate before so I can't give you any suggestions on that. You may send the photograph to me and I will see how I can help.