On the last day of January 2009, I went on an exploration trip again with my explorer friend and this time to Karimun, one of the islands in the Riau Islands province of Indonesia. We woke up early in the morning, met at the Singapore Cruise Centre at Harbour Front and took the 08:00hrs (Singapore time) ferry there. Of course, preparation began way before that, a search on the Internet will let you know many things about Karimun Island which I shall not elaborate here. 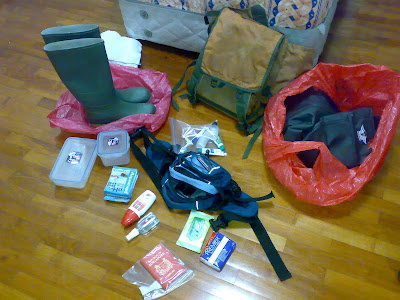 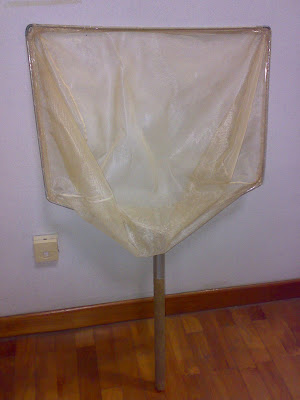 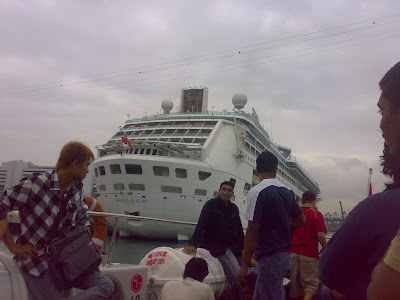 On the deck of the ferry 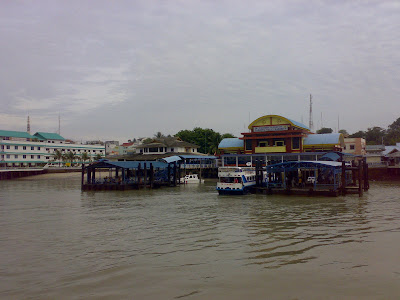 Reaching Tanjong Balai ferry terminal
After one and a half hour of ferry ride, we reached Tanjong Balai ferry terminal of Karimun Island. When it came to my turn to clear the immigration, my attention was caught by the Singapore dollar and Indonesia rupiah notes on the immigration counter and I was trying to figure out why these notes were lying there such that I did not realised that the immigration officer was mumbling something to me. "Gong xi gong xi, gong xi fa cai" (a Chinese New Year greeting in Mandarin), the officer repeated, this time louder while pointing at the pool of notes. I promptly surrendered S$2 as a small token to avoid trouble while still in a state of shock at the openness of the gesture.
After confirming our return ferry time, we ate claypot Bah Kut Teh (pork rib soup) for breakfast and negotiated the price for our ojeks (motorcycle taxis) from $200,000 rupiah to $150,000 rupiah for driving us around the island from 09:30hrs to 16:00hrs (Indonesia time). 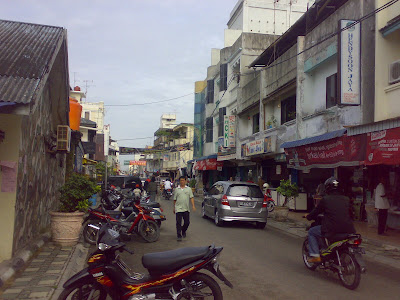 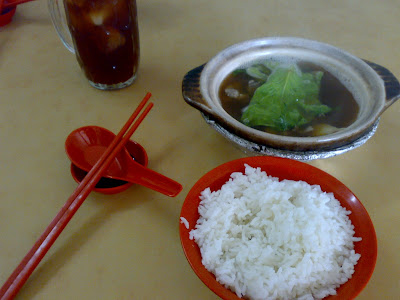 Locating cryptocorynes in the wild needs sense and sometimes luck as well. The 1st location where we had luck to find cryptocoryne was in a ditch within a kampong (village), probably man-made for irrigation and water supply for bathing, washing clothes, etc. The cryptocorynes were submersed about 0.3m to 0.5m below water, with their leaves all covered with dirt such that we had to step in to fish out a specimen before we could confirm that they are cryptocoryne. 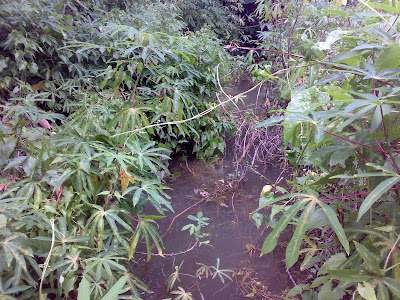 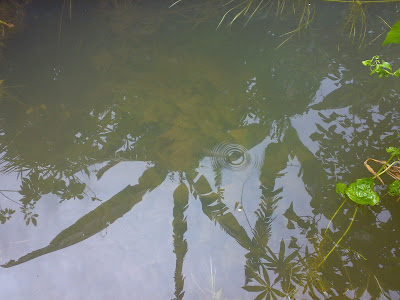 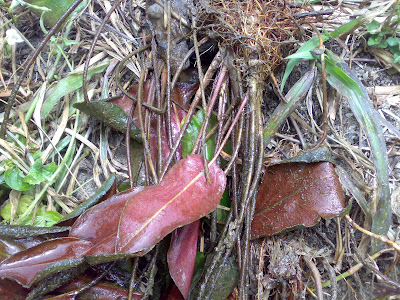 Bull-eye, cryptocoryne! Although we did not managed to find any flowers, we guessed that it was C. griffithii from the appearance of the leaves. The substrate was sort of muddy and the pH of the water was about 6.5. 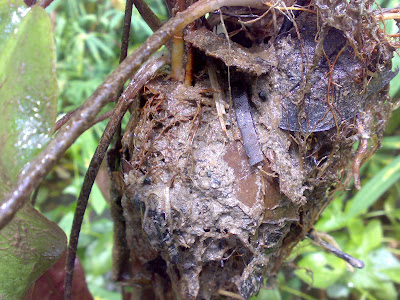 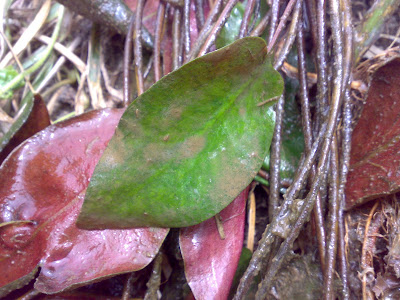 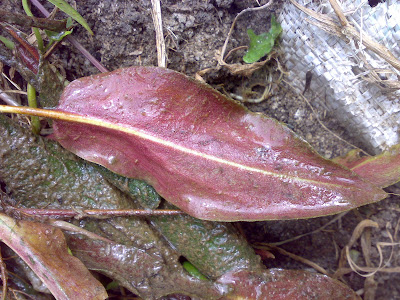 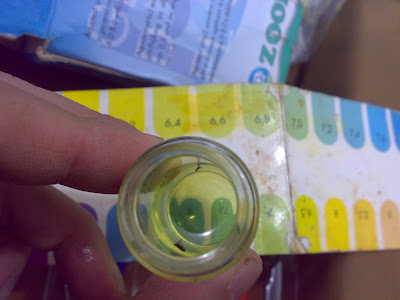 The 2nd location where we located cryptocorynes was along a flowing natural small stream. I first only noticed a small bunch of submersed cryptocorynes along the bank of the stream. Lifting my head up, I saw heaven: large patches of cryptocorynes growing emersed on the shallow banks upstream! We found an opened spathe this time to confirm that it was C. griffithii. The substrate at this location was sand and the pH again was about 6.5. 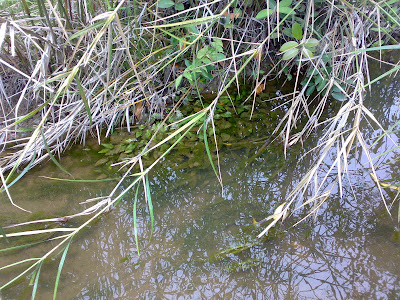 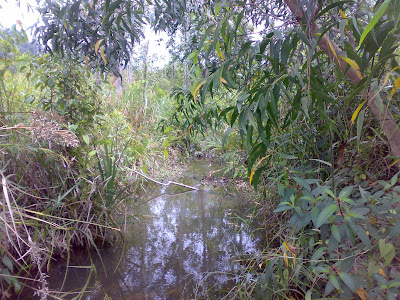 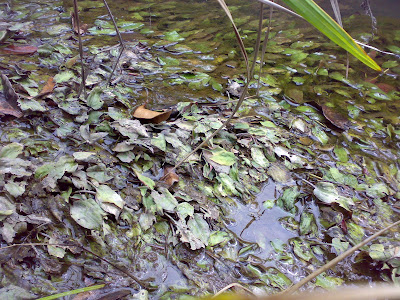 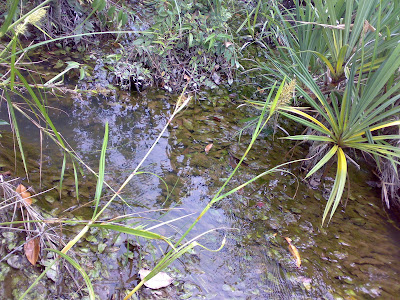 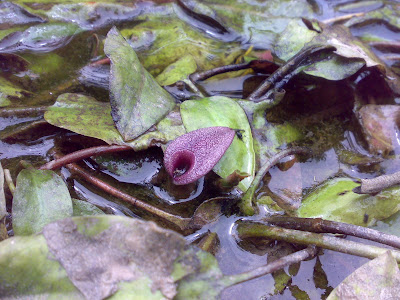 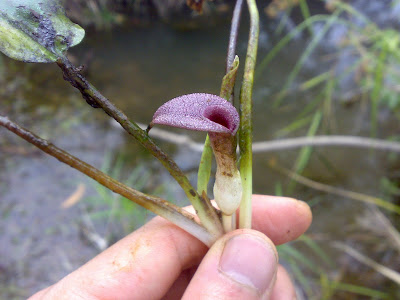 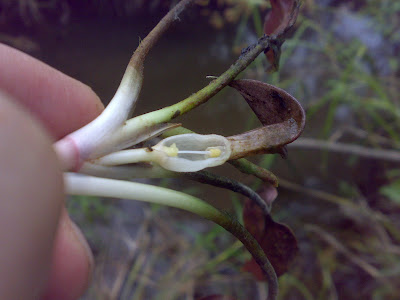 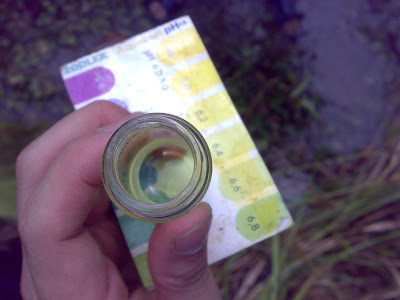 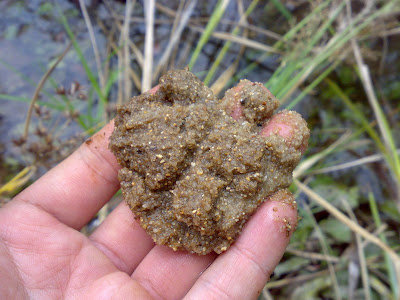 We ended our exploration early at 15:00hrs (Indonesia time) and wanted to have some delicious looking prata for late lunch before heading back to Singapore. Then trouble started, the ojek drivers refused to accept the agreed $150,000 rupiah per ojek and insisted that we pay more as they have taken us on longer routes then they expected. We insisted that we were not paying any more than what was agreed and that we were good enough to end the trip earlier than 16:00hrs.
When I wanted to pick up our cooler box and walk off, one of the ojek driver stamped his foot onto the cooler box and refused to let me take it. My friend tugged the box away from under his foot with force and both of us headed to the immigration clearance area with the 2 drivers following us menacingly. By then we had already created quite a scene and some Chinese ojek drivers were sneering at us loudly saying "Who ask you all Chinese don't support Chinese and rent ojek from them instead. Hahaha...".
We cleared the immigration immediately (not without succumbing to paying another S$2 to the 2 ladies collecting port tax) leaving the 2 ojek drivers cursing at us outside. And as before in other previous trips, I took a bathe in the public toilet in the departure hall using the water from the hose connected to the flush cistern which people usually use to wash their ... :-p While waiting for the ferry and thinking of the delicious prata which we did not managed to eat, we concluded that we will never want to come back to this island again after having such bad experiences.
Anyway from the species of betta (i.e. B. pugnax unlike B. cracens and B. chloropharynx at Lingga Island) and cryptocoryne (C. griffithii unlike C. scurrilis at Lingga Island) we collected, we reckoned that the distribution of species on this island is likely to be closer to that of Malay Peninsula rather than that of Sumatra so there are nothing to entice us to return here when we can easily go to Malay Peninsula instead.
As usual, I ended the trip scrubbing off all the dirt collected on my waist pouch, clothes, boots, etc. 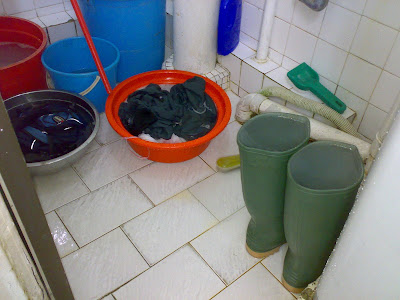 Posted by illumbomb at 1:43 PM