I went with a few old friends to a trekking trip last month to Pelepah falls at Kota Tinggi. This was the location where I was supposed to visit 3 years ago when I planned for my 1st betta and cryptocoryne hunting trip to Peninsula Malaysia. However our guide fell sick the day before we set off, resulting in me landing up in Air Hitam where I met my explorer friend!
This time round, we set off early at 0630hrs in the morning and had breakfast at a Chinese tim sum shop in Johor Bahru first since it was Ramadan period (i.e. fasting) and all the Muslim food stalls were closed. 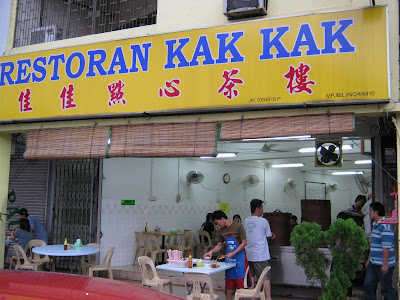 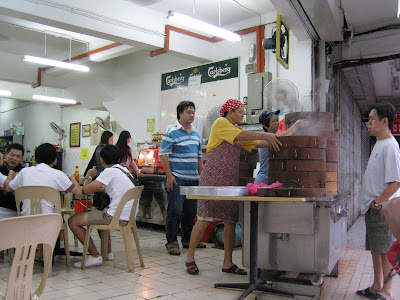 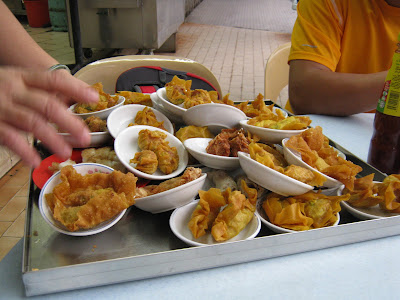 Pelepah falls seemed to be a rather popular trekking place for avid trekkers in Singapore and some people mentioned on the Internet that the trek is reasonably easy but I don't think so personally after going through it. The falls is stated to have 12 tiers and from the map, it seemed to be located in the valley of 2 hills. The water flows down the multi-tiered waterfall and discharge into Sungei Pelepah Kiri flowing through an oil palm plantation below. We entered the plantation and trek along the river upstream to reach the forest behind to start our ascend up the waterfall. 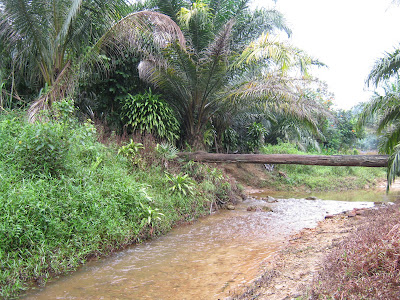 As I was climbing out of the stream into the oil palm plantation with my friend, we suddenly heard a foreign loud noise. I raised my head to see what was the sound source and was shocked to see an adult black spitting cobra (Naja sumatrana) with its hood opened and head raised sliding passed our path merely less than 5m away. Only then did I realised that what I had heard was the loud hissing noise from the cobra threatening and warning us. We were frozen still until the cobra slided into a heap of dead oil palm leaves and did not had a chance to take any photographs. Be extra careful when you travel in oil palm plantations in the future! 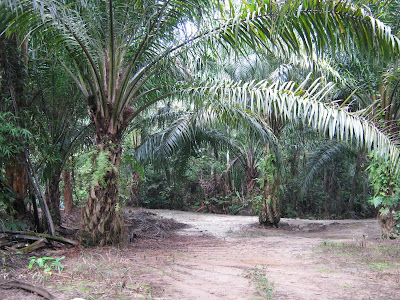 We crossed the plantation land and reached the forest edge where we commenced our ascend up the river. I managed to take photograph of a frog which I believed should be a rhinoceros frog (Limnonectes plicatellus), please correct me if I am wrong. 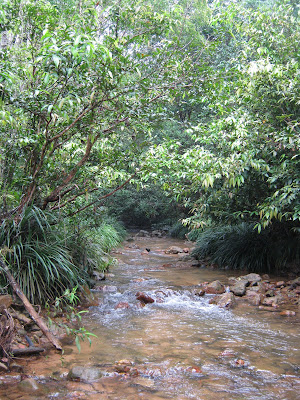 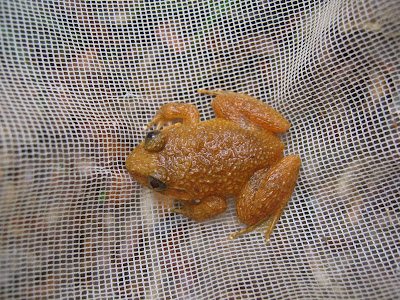 We followed the general direction of trekking up along the river edge, sometimes having to make a detour or cross the river to walk along an easier path. Soon we reached the 1st tier of the waterfall. 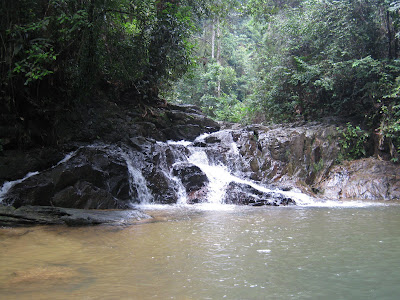 There were many bi-colour piptospatha growing on the rock surfaces. 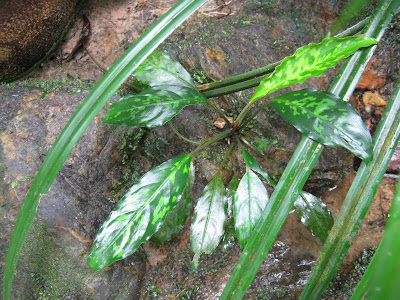 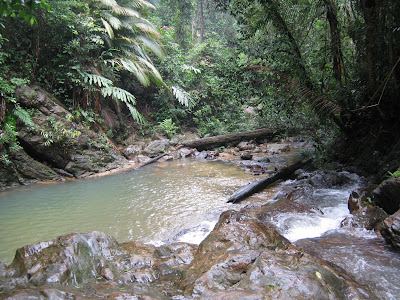 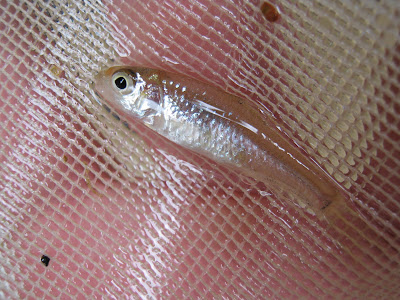 As it was drizzling the entire morning, the entire path was wet and very slippery, especially since most rocks and logs were covered with mosses or algae. We had to slowly take one step at a time to test whether the ground was slippery and many a times, we had to go down on all fours to ensure that we do not accidentally slip. 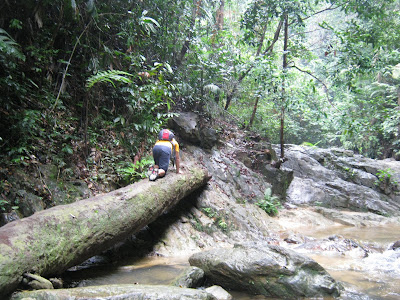 When we reached a tier of waterfall where we could not climb up which usually was the case (extremely slippery algae covered rocks with water gushing down and having no foothold), we had to flank the waterfall on either sides and this sometimes involved climbing up vertical steep slopes. Luckily there were ropes left behind by previous trekkers to help other inexperience and ill-prepared trekkers like us :-p 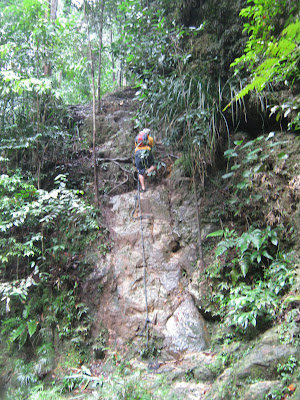 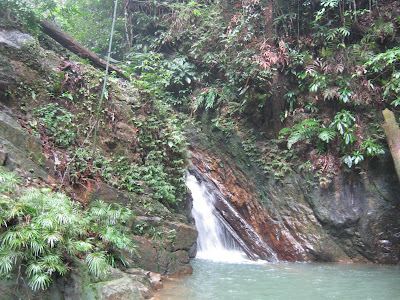 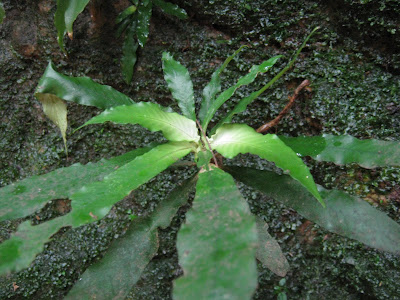 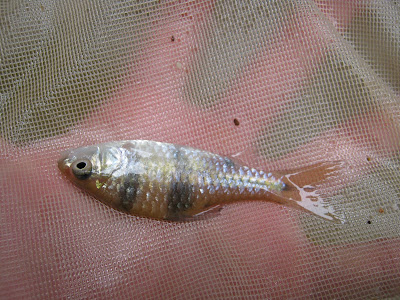 As usual, I received a love bite from my friend, the leech. 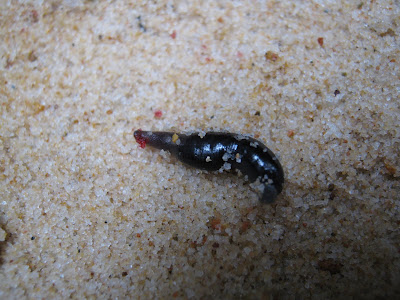 There was one particular section of the trek which was rather dangerous. The rocky sides of the waterfall closed up vertically to form a deep valley which was difficult to flank since we did not managed to find any ropes which signified a previous path used by other trekkers. We had to wade through the river in stomach to chest high water to reach the next tier of waterfall. I am sure that during heavy rain, the water level in this rocky valley probably would increase by a few meters rapidly (i.e. flash flood) so do not trek this path in heavy rain! 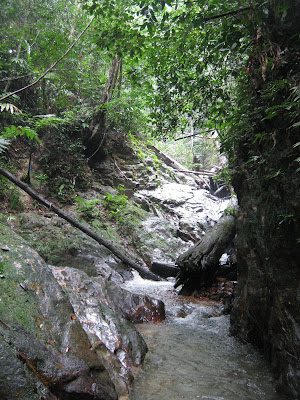 The top few tiers of waterfalls were quite beautiful. As we had been trekking for about 3 hours already by then, I was quite exhausted physically (from all the climbing) and mentally (from the constant focusing to ensure each step taken was safe). We decided to stop at the tier which supposedly was the main waterfall with water flowing down a long stretch of 45 degree rocky slope. We would leave the last tier of waterfall till the next visit when we bring some camping equipment to stay overnight at the top of the hill which supposed had a white sandy base. 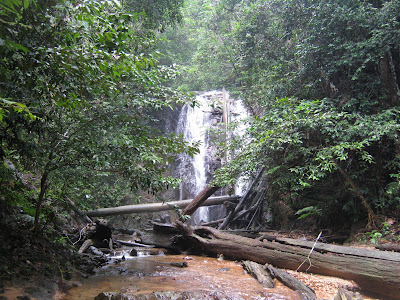 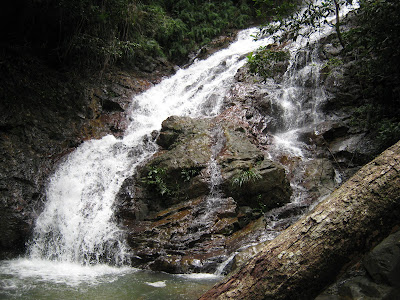 I remembered that someone told me that the shrimps caught at the top of the waterfall were sweet and delicious so I decided to give it a try, errr, no comments... 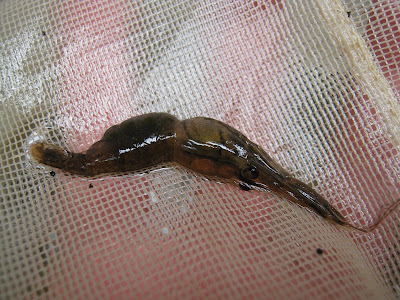 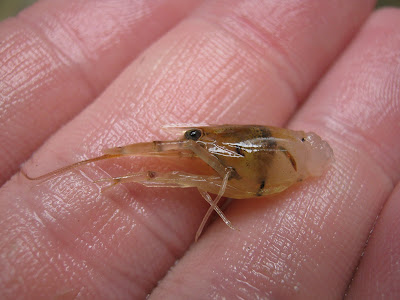 What goes up must come down. The downstream journey was relatively easier and thus we managed to climb down all the rocky paths which we passed by earlier in less than 2 hours. In total we took about 5 to 6 hours to complete the above stated trek. We went back to Kota Tinggi town for a late lunch of Bah Kut Teh (pork rib soup with rice) before heading back to Singapore. 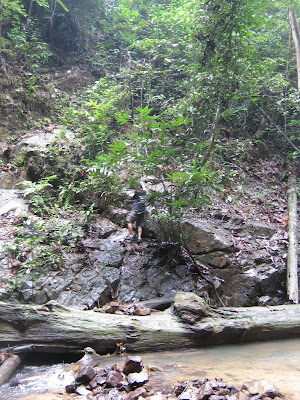 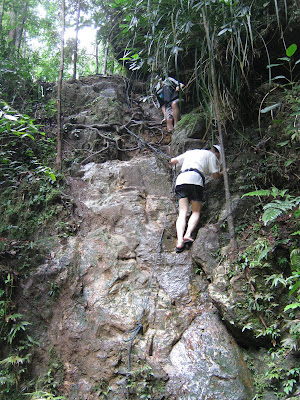 This was the souvenir I collected, the leech bite with a T shape marking formed by blood flowing down 3 sides of the foot. 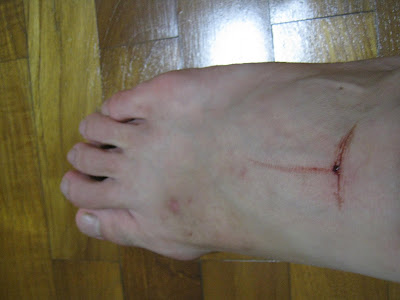 No cryptocorynes were found.
Posted by illumbomb at 12:40 AM

I do so enjoy your trips, though I suspect I would like to skip the Leeches and spend longer in the great restaurants. I thank you for taking the time on our behalf - your readers.

Hi, can you help to advise if permit and guides are needed?
Serene

If you want to follow our route, you will technically have to "trespass" into the rubber plantation along Sungei Pelepah Kiri and trek along this river to reach the top. Enter the plantation from the river and not from the main entrance of the plantation.

I did read on the Internet that permit was required a few years ago. However, I did not apply for permit nor did I engage any guides when I went there recently.

Along the way especially when you reach the various tiers of waterfall, you will have to detour along the sides of the waterfall to search for easier paths. If you find yourself in situation where you need to perform difficult ascend or descend without guide ropes present, chances are you have chosen a "wrong" path and there should be a safer way. Turn back and look for it.

However, unless your group consists of experienced trekkers with some experience in rock climbing, I do not recommend you to try this trek as I personally found it rather dangerous (i.e. steep slopes, very very slippery, some paths are subjected to flash floods, etc).

Safety first before having fun!