We managed to find a very good map of Kalimantan in one of the hotel where we stayed over. I took a photograph of South Kalimantan area as shown below. The mountain range running north-south shown in the photograph is known as Meratus Mountains with its highest peak, Mount Besar at altitude 1,892m. 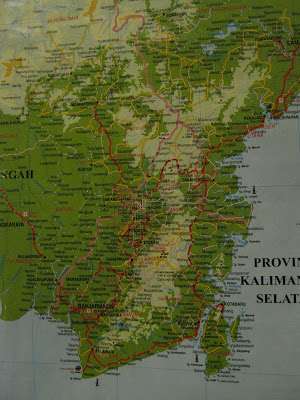 There are many roads of various sizes leading up this mountain from all sides, some roads are accessible by car or motorcycle while others would require you to travel on foot. You would probably need no lesser than one week to properly search the entire mountain. However, we did not have such luxurious time. 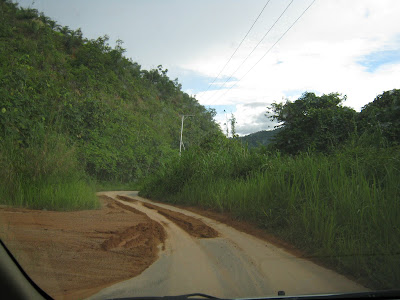 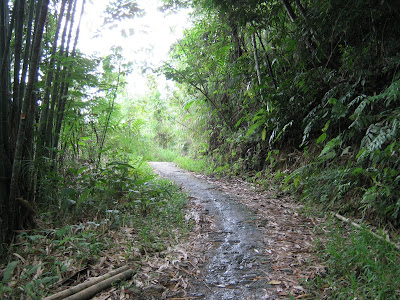 From far away, some of the hill peaks seemed to be grass peaks. 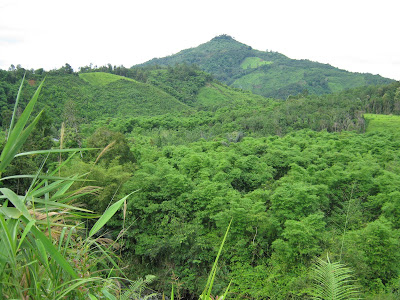 When we approached nearer, I was surprised that the "grass peaks" were actually dry version of paddy fields on top of the hills. 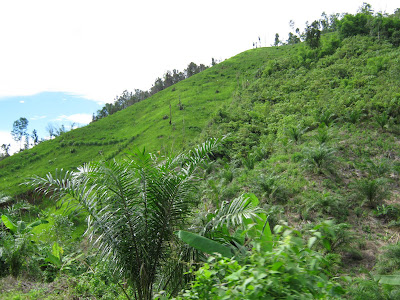 Below are some photographs of the mountain range. 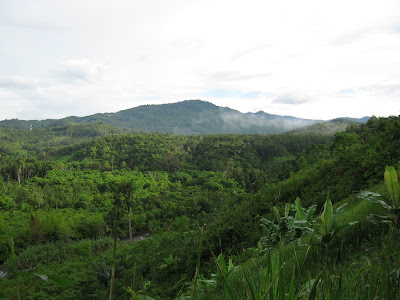 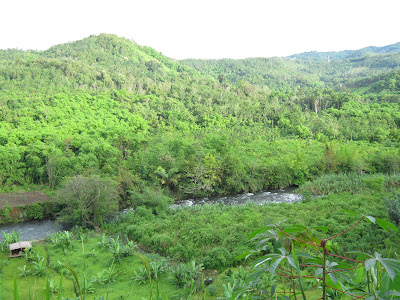 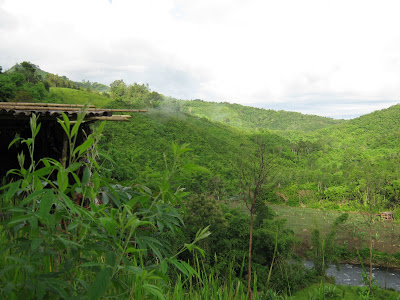 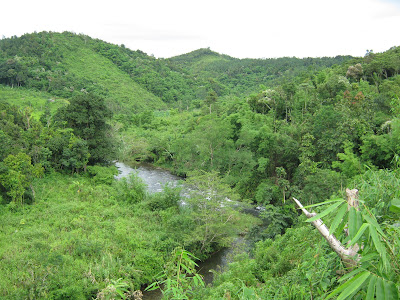 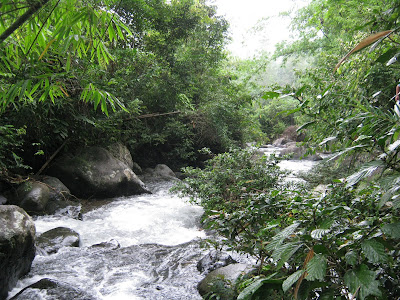 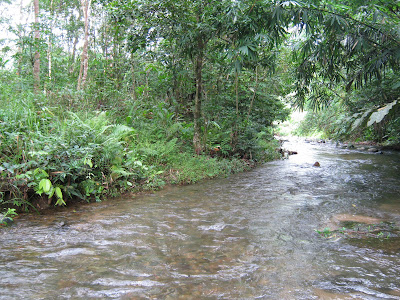 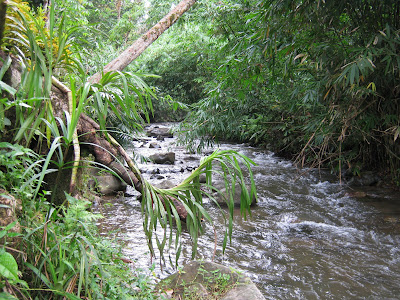 There are many pockets of houses on the mountain belonging to the deyaks there. 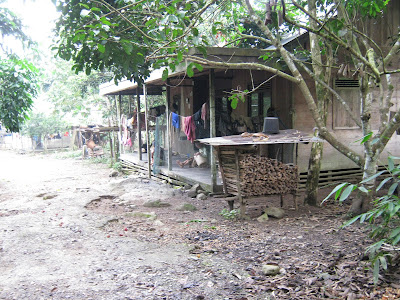 One of the house was sunning cinnamon barks on the front porch. 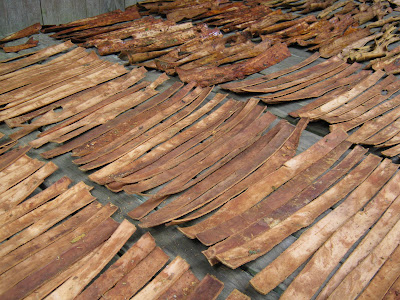 Most houses we passed by on Gunung Besar had many different types of fruit trees grown around them. One of the locals climbed a few trees at amazing speed to pluck some fresh fruits for us to try F.O.C. You would not want to eat mangosteens bought from the supermarkets anymore after you tried these fresh mangosteens harvested directly from the tree. Sweet! 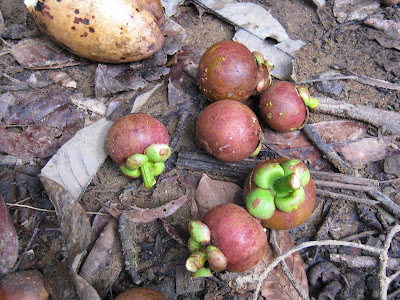 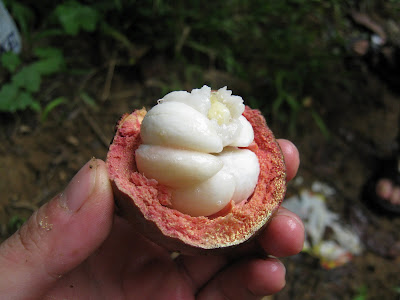 The local told us that this fruit is called Binjai with white juicy flesh. It tasted a little like sour mango or soursop, very exotic taste. We were told that this fruit is added to their chilli paste (I will introduce the food of south Kalimantan separately in another post) to enhance the taste, a cheaper alternative for the poorer people would be tomatoes instead. 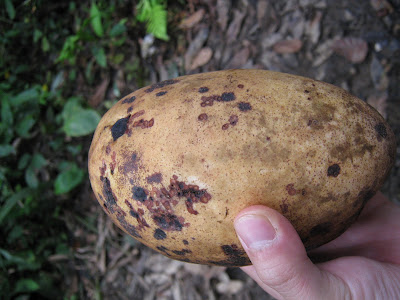 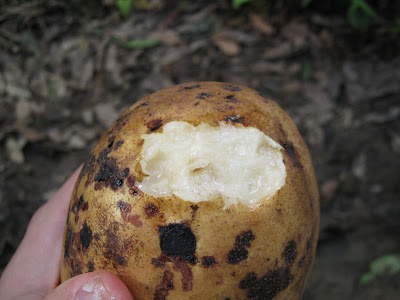 I did not catch the name of this fruit. It should be somewhat related to the mangosteen family due to the similar apperance of the interior of the fruit. It was subtly sweet tasting. 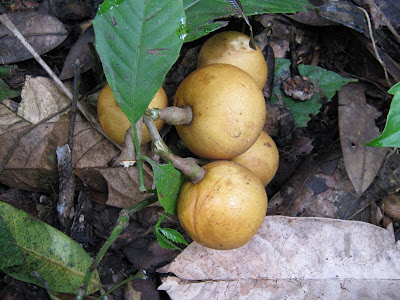 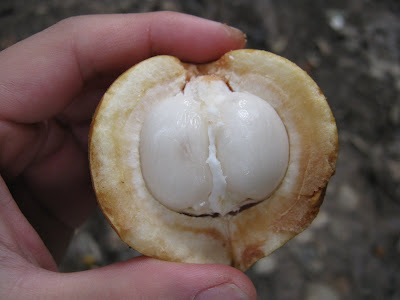 The duku fruits harvested straight from these trees were very sweet too. 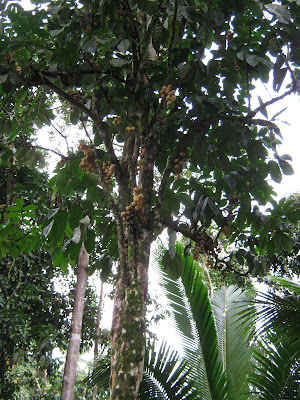 Yummy.
Posted by illumbomb at 1:05 AM