the rest of day 2 on Belitung, visiting the flooded C. fusca habitat

We spend the rest of our day travelling to the eastern end of Belitung island to look for more cryptocorynes habitats, including that of C. fusca. Along the way, we passed by many different types of rivers and streams, ranging for large flooded open rivers to smaller but still flooded forest streams. I took some photographs of the various inhabitants wherever I had the chance to do so. 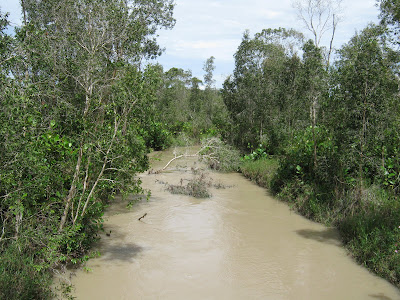 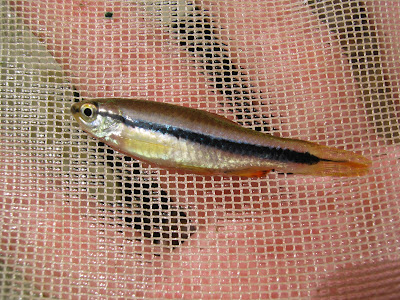 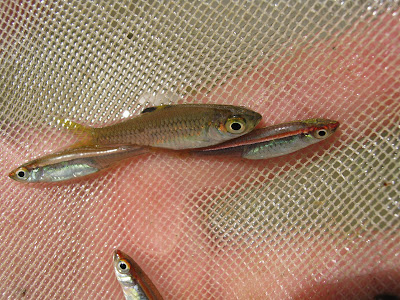 Red line rasboras were one of the many beautiful fish that could be found on Belitung. I caught the same type of rasbora on Bintan Island too. If you magnify the photograph, you would be able to observe that the red line is actually formed by many small red dots. 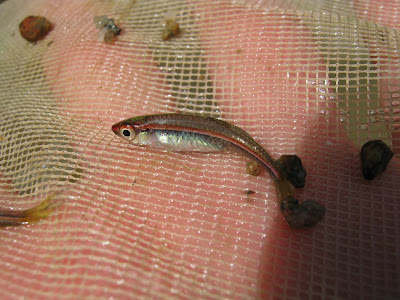 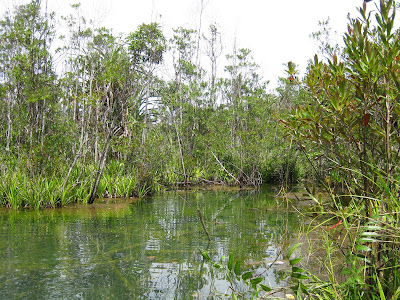 These horizontal tree trunks were my saviors when bashing through flooding swamps with palms. They provided me with supports to prevent myself from stepping and sinking into the soft muddy ground (haha, as stated before, I do not like to get my feet wet!) 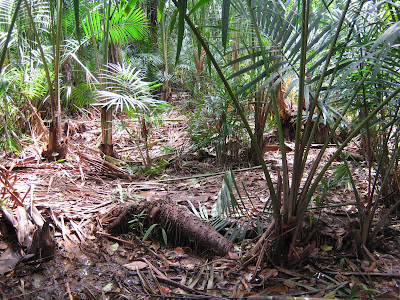 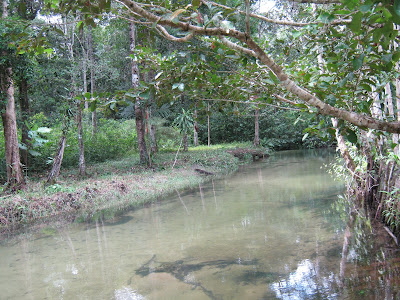 This was a land sea cucumber I found at outside the restaurant which we had lunch. Lunch was plain but delicious nasi goreng (i.e. fried rice). 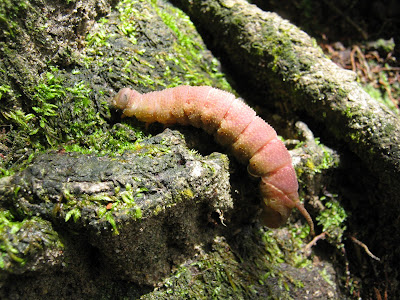 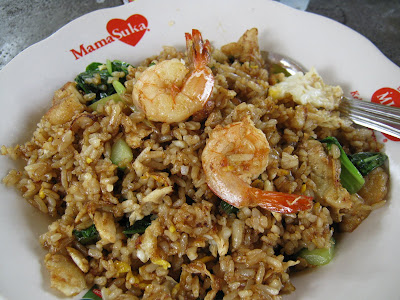 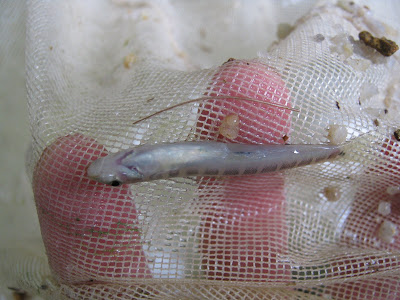 The below plant is very common on Belitung and could be seen everywhere around the island. 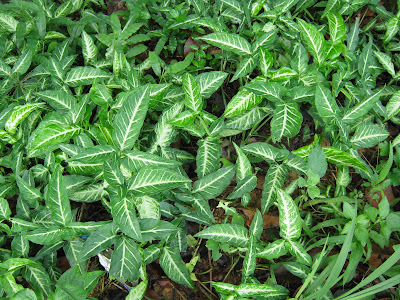 Sadly, there were some streams with mining activities being carried out. 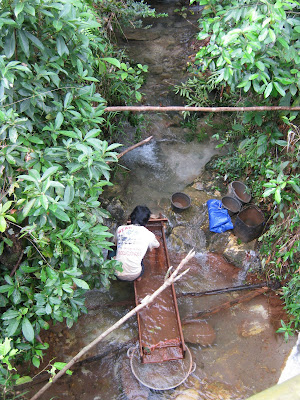 Soon, we reached the location which were tipped to have "black leaves" C. fusca. We could find none except a fast flowing stream inside a forest. After asking the villagers living nearby, we confirmed that the cryptocorynes could be found only at the base of the stream. The stream water level had rose by more than a man's height according to one of the villager. 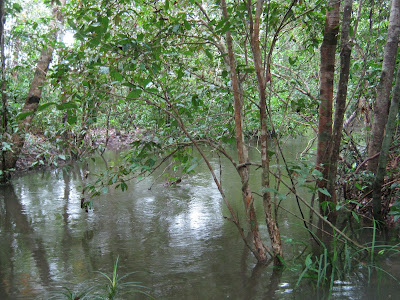 We stepped into the water slowing feeling our way under water with our fishing net. At one point, the stream base started to drop almost vertically and we decided to stop advancing. Suddenly, my explorer friend started to swing his fishing net in a fashion as if he was trying to scoop something out of the water. As he stopped swinging, he told me that he saw a snake within the vegetation growing out of the water. 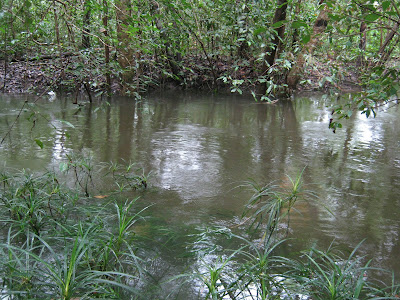 We then saw that a snake was still stuck inside his net. After a few more violent swings, the snake finally was flung out of the net and we saw the snake sliding away on the water surface. We decided that it was not worth the danger entering into this fast flowing deep stream with snakes around just to collect C. fusca. 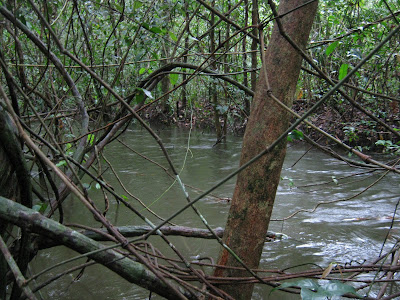 We passed by an open swamp land along the way near evening time, the rain had not ended since it started int he morning... 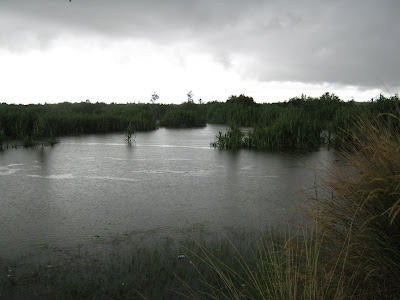 We had some fried goreng pisang (fried bananas) for tea. 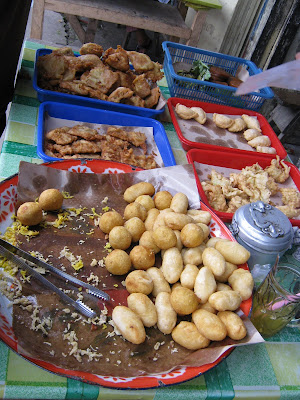 The day finally ended with some star grass collection. 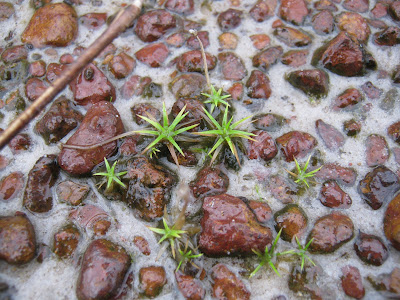 I had nasi ayam panggang kecap (rice with barbecued chicken in sweet soy sauce) for dinner in a restaurant opposite to our hotel. 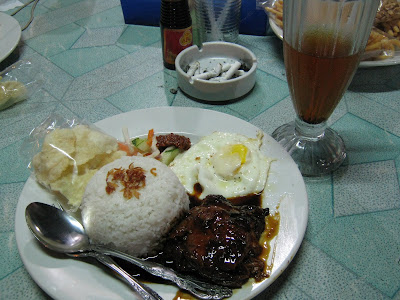 As I said before I love the food and such fascinating sceney for a westerner like me.

Don't just be fascinated, come and experience it for yourself.

You just need to spend hours and hours doing detailed research on the Internet for the location names (i.e. river, forest or village names) of the habitats of the various species of fishes and cryptocorynes, search for these locations on Google map and plot them out on free maps available on the Internet for download. Finally, book a flight and a car and soon you will be on your way to visit your 1st cryptocoryne or fish habitat!

Is it really worth the time, effort and money? Not at all unless you are really obsessed about it like me! Haha. At the meantime, continue to enjoy the blog. Thanks.